Full house for “India & EU – Co-creation of projexts in aligment w/ #SDGs” at @ficci_india in Delhi, marking the end of the #EUBBB week in India! After His Excellency @EU_Amb_India Tomasz Kozlowski and @ficci_india addresses, time for technical sessions! #businessbeyondborders pic.twitter.com/MBGDScjjOV

In sync with discussions of the previous panel, we now engage in an interactive session, identifying need, scope & concrete opportunities for Business Partnerships between European & Indian entities with regard to #CleanEnergy & #ClimateAction. #BusinessBeyondBorders #EUBBB pic.twitter.com/ptFJUVjvS5

Our panel now delves into a discussion focusing on various #RenewableEnergy options, their #ResourceEfficiency♻, and their role in providing affordable & #CleanEnergy to the masses. #BusinessBeyondBorders #ClimateAction #EUBBB pic.twitter.com/YZXZj5bqWR

As Mr Adriaan Kamp, CEO, Energy for One World and moderator of the session  said that day, “our opportunities on and between Energy and UNSDGs , and India and EU is invited to become 6 times bigger, 6 times faster.”

Further, giving the welcome address at the ‘India and EU – Co-Creation of Projects in alignment with Sustainable Development Goals (SDGs)’ dialogue session on Friday, EU Ambassador , H.E. Mr Kozlowski said, ‘We are now working on practical solutions. That’s why it’s important to come together to foster business opportunities between European and Indian companies’.

Convenor of the summit, and Director, EBTC (European Business and Technology Centre), Mr Poul V. Jensen, in his closing remarks, highlighted that follow up is the most fundamental element of such delegations and expos. Thus, he asked participants and businesses to reach out to EBTC in 6 months and check if these meetings translated into real business.

Please feel free to reach out to EBTC or Energy for One World for any further questions.

We look forward to collaborating with you. 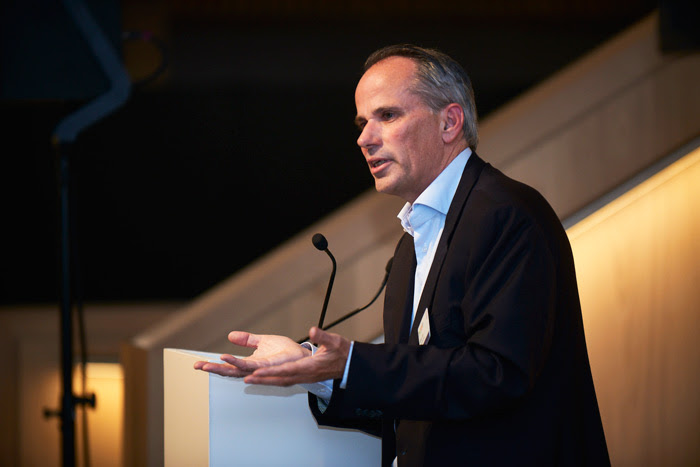 2.Why is energy a great place to start making your business circular?

Adriaan Kamp answered by saying that it’s energy – not money – that makes the world go around. After all, it’s energy that turns materials into money.

But he explained that it’s time for all businesses to make sure our products are not only affordable and available, but also good.

He cited the three pressures that all sectors, including energy, face. Globalisation, climate change and dwindling resources.

Motioning to the great hall around us, however, he said the Design Museum itself is testament to what the human spirit, hand and genius has done over the last 100 years to transition when needed – and change our world and our state.

It’s time now, he declared, for us to make such a transition in business in general and energy in particular, where we must change the state of power.

He said only 20% of the world’s total energy consumption is from electricity, the rest is from fossil fuels. Our goal, he declared, must be to raise this to 50% – and fast.

For Kamp, the circular economy represents an opportunity for all business to change so that we can make, use and manage without guilt.

Applying this to our industry, he explained, going circular will enable us to make, use and manage energy without concern.

I vividly remember how we were discussing and lobbying for such an approach in the Energy Transition classes in the Netherlands. I also remember that I was sitting next to Jeroen vd Veer, and on stage, and how these plans were considered way too expensive. Most happy,.to read 3 years later- these better words and actions from the Horses mouth. Yes- change can become, and as the better changes can become from within. Come on- lets go!

Royal Dutch Shell Plc, Europe’s most valuable oil company, expects its expertise in managing risk will make it a market leader in developing the clean-energy industry.

Offshore wind projects are attracting billions of dollars of investment and will become “the energy backbone” for European countries from Germany to the U.K., said Mark Gainsborough, Royal Dutch Shell Plc’s head of new energies.

Oil companies have a natural advantage in that business, since they have spent decades learning how to manage financial, political and project-development risks, he said. That gives them an edge over renewable energy developers, who prefer to pin down long-term power-purchase agreements or government support before moving forward. As the renewables industry shifts to more subsidy-free projects, it may be the established oil companies that can handle the gambles that come with competing at market prices.

“We know that we have to change and be real players in the energy transition,” Gainsborough said in London. “The potentially interesting transformation for this industry and most renewables is the transition out of the subsidy-driven world into a world where you’re taking merchant risk, which we’re very used to doing in oil and gas.”

Article/ Interview in Intermediair- and in reaction to some views from active shareholders in the upcoming RoyalDutchShell annual shareholders’ meeting ,  16 April 2016,

Also Adriaan Kamp, a Norway resident consultant in the energy sector who worked for years in senior management positions at Shell and has many contacts within the Group recognizes recent developments no structural shifts in the Shell strategy. While those are however necessary, according to him. He describes the company as a “sputtering two-stroke engine ‘with a’ machine that is filled with more and more large-scale oil and gas projects.

Kamp sees in the current board and management of the Company not reformers. Kamp: “There is still too little will to change. The business model is fundamentally the same as twenty years ago. The way in which projects are validated economically, has not changed over  time, and which is actually now quite essential.  Shell may change, however, thinks Kamp, but then there must be a better and deeper dialogue within the offices on a future that is not entirely dependent on oil and gas. He ties immediately an open invitation to Shell: “I donot mind to be Shell’s  Max Havelaar. Someone with a listening ear and who enters the conversation with the Board of Directors.

( you will hear our contribution from 11:09 mins onwards)

What will happen to oil and gas workers as the world turns carbon neutral?

Building a wind farm or solar energy project is nothing professionals in fossil fuels can’t manage, but there are too few programmes to help them retrain

Adriaan Kamp used to be a die-hard oilman. After 17 years at Anglo-Dutch oil company Shell, the 54-year-old Dutchman now runs a consultancy based in Oslo advising national governments on transitioning to cleaner energy.

“In 2007 to 2008, we were looking at future energy scenarios in the Shell Group [and] there was a question on my desk about how do we play with renewables,” he says. “And from there, the journey started.”

Go to article in Guardian

As Davos convened for 2015, Adriaan Kamp, founder of Energy For One World, said: “We need a revolution. We need to instil a new spirit in our companies, society and economies. Our present constellation of leadership and status quo simply won’t do. They have failed. The elite can’t change the elite. So the better question to ask ourselves is how we, the professionals in business and society, can organise ourselves differently to clean up this mess? How can we organise for true success and a true new growth?”

Taking time to ponder questions such as these may be the most important activity this week in Davos. The answers that will emerge over time will help determine the world we live in.

Oil companies like Shell have unique skills that make them ideally placed to help build the energy world of the future. Yet they seem unable to look beyond their own interests, says Adriaan Kamp, former Shell manager and founder of Oslo-based consultancy Energy For One World. “Like the banks, they can’t change their ways. They are still making too much money with oil and gas.” According to Kamp, the growth strategy of the oil companies is still based exclusively on expanding their oil and gas business – in Shell’s case most of all LNG. “They leave it to others to come up with the real solutions.” Kamp is convinced this strategy is doomed to failure. “The present energy system cannot continue as it is.”

Subject of the interview: How is the Netherlands prepared for high oil prices in the future?
“Today we receive a warning from the International Monetary Fund: About ten years from now the oil prices will have been doubled. It will mean more expenses for our country, that is extremely dependent on fossil fuels, not just gasoline, electricity and gas. Also, many companies will be less competitive.

How should The Netherlands prepare? Countries around us are already fully investing in renewable energy. Will investing in solar panels on the roof and windmills in the meadow save us? Or is there more?”

7th December 2012, Verbier, Swiss Video Message to the attendees of GPS 2012 ( a global gathering of investors in cleantech)