With compliments to organizing country Argentina, this G20 in Buenos Aires seemed a success and “to have been holding it all together”- “the soup served and eaten not that hot as it was cooked”, and giving each of the parties what they wanted and sought.

And with some specific articles on Energy, Climate and Sustainable Development

19. A strong economy and a healthy planet are mutually reinforcing. We note the latest IPCC Special
Report on the Impacts of Global Warming of 1.5 degrees centigrade. We recognize the importance of
comprehensive adaptation strategies, including investment in infrastructure that is resilient to
extreme weather events and disasters. In this sense, we support actions and cooperation in
developing countries, especially those that are particularly vulnerable, including small island states
such as those in the Caribbean. We discussed long-term low greenhouse gas emission development
strategies and alignment of international finance flows. We also shared countries´ experiences and
considered the 2018-2019 work program on adaptation, acknowledging that each country may chart
its own path to achieving a low emission future. We look forward to successful outcomes of the
UNFCCC COP24, and to engage in the Talanoa Dialogue.
20. Signatories to the Paris Agreement, who have also joined the Hamburg Action Plan, reaffirm that
the Paris Agreement is irreversible and commit to its full implementation, reflecting common but
differentiated responsibilities and respective capabilities, in light of different national circumstances.
We will continue to tackle climate change, while promoting sustainable development and economic
growth.
21. The United States reiterates its decision to withdraw from the Paris Agreement, and affirms its
strong commitment to economic growth and energy access and security, utilizing all energy sources
and technologies, while protecting the environment.
22. We recognize the crucial role of energy in helping shape our shared future and we encourage
energy transitions that combine growth with decreasing greenhouse gas emissions towards cleaner,
more flexible and transparent systems, and cooperation in energy efficiency. We recognize the
opportunities for innovation, growth, and job creation through increased investment into cleaner and
sustainable energy sources -including renewables-, technologies and infrastructure. We acknowledge
the role of all energy sources and technologies in the energy mix and different possible national paths
to achieve cleaner energy systems under the term ‘transitions’. We will promote energy security,
sustainability, resilience, efficiency, affordability and stability, acknowledging that there are varied
sources of energy and technological advances to achieve a low emissions future. We continue to
promote universal energy access by eradicating energy poverty, cooperating to provide displaced
people and disaster-impacted and remote areas with access to it, and through enhanced
implementation of G20 regional plans.

Beautiful words spoken,- and with some fine form of responsibilities delegation (“shuffling”) towards Katowice.

But the big and better question(s) here are:

How are we to organize this, in and amongst ourselves?

How do we move from where we are, today- to where we need to be?

A little more on this- in the remainder of this article.

But alas, Trump and Xi Jinping could agree on trade issues, put an imminent trade war on hold for 90 days (and under the understanding of “a fantastic purchasing deal buying American produce”), and in the G20- Leadership communique agreed on the rule-base, and that collaboration and trade and investments are  the engine for sustainable development, job creation, innovation and economic growth.

Also a win-win for Xi JinPing Belt and Road and strategic economic growth, at home.

America could re-affirm its position on the WTO and Paris Agreement, and whereby the Trump administration could signal its commitment to using all energy sources. Surely music in the ears of all resource holding nations at the table (e.g. Russia, Saudi), and all resource craving nations (re. India, China- but also Poland, Turkey , Australia, Indonesia (coal-using nations)).

With coming weeks a new OPEC price setting meeting on the agenda- I guess that the “leadership of (energy) fortune” may all have felt pretty good, and on “top of our world”.

It was also the meeting of the crown Prince of Saudi, MBS, presence with the G20 leadership. “The high-five with Putin”, and the earnest and staged words spoken between Macron and MBS “you never listen to me”- may have received some attention, world round.

De facto, and in presence, we could witness here some new form of Leadership Apprentice: claiming your territory and domain.

Questions further can be:

What got SG Guterres out of all this?

I guess that the picture taken at the conclusion of COP24, Katowice- shares it all:

Let us celebrate – with him and the organizers- this and his moment.

Later, I will reflect with you- on what we have seen and experienced here at COP24, and what we may deduct for our year(s) to come. 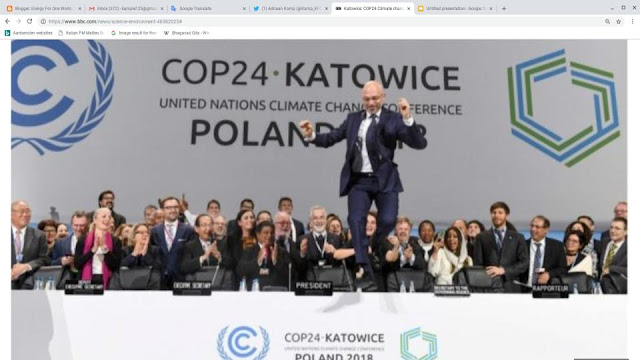 COP24 Katowice Text- Rulebook from Energy for One World

I guess the following words by Ed Crooks of the Financial Times- states and shares already some views and observations:

As I write, the talks have not concluded. The closing plenaries of the Conference of the Parties — the countries that are members of the UN Framework Convention on Climate Change — and of the CMA, which includes only countries that are in the Paris agreement, were scheduled for Friday, but the wrangling was seen as very likely to drag on until Sunday. I was at the 2009 Copenhagen climate talks, COP15, when the talks were still going on over the weekend as the conference venue, the Bella Center, was being cleared for the next event.
Two incidents at the start of the week highlighted the difficulty of finding global consensus on how to tackle the threat of climate change, or even agreeing what the threat is. Over the weekend, the US teamed up with Russia, Saudi Arabia and Kuwait to water downgovernments’ approval of a report spelling out the consequences of allowing the global temperatures to rise more than 1.5C since pre-industrial times. It was no coincidence that the objecting group included the world’s three largest oil producers, and another in the top 10.
Then on Monday, the US delegation held an event to emphasise the importance of fossil fuels, reflecting the Trump administration’s support for the country’s “energy renaissance”, and its plan to withdraw from the Paris agreement. Wells Griffith, the lead official for international affairs at the US Department of Energy, told the meeting “we strongly believe no country should have to sacrifice economic prosperity or energy security in pursuit of environmental sustainability”. Patrick Suckling, the head of the Australian delegation at the talks, showed support by speaking at the event, and Mr Griffith said later that there had been “a lot of interest” from other countries, suggesting wider enthusiasm for the US position.
The US is in a minority of one in wanting to withdraw from the Paris agreement, however. On Wednesday Khalid al-Falih, energy minister of Saudi Arabia, delivered his statementto the conference, raising concerns about an “undue emphasis on energy and particularly oil” in climate negotiations, “with efforts to impose excessive and unrealistic taxes on hydrocarbon fuels”, but also reiterated the kingdom’s commitment to the goals set in Paris. When the lone dissenter is the world’s largest economy, though, it can have a significant impact on the debate. Xie Zhenhua, China’s senior climate official, on Thursday warned that negotiations were “deadlocked” in some areas, and urged the US to return to the process and “use its leadership”. On Wednesday António Guterres, the UN secretary-general, flew back to the talks to deliver an emergency address, urging countries to reach agreement. But by Friday there was still no resolution in sight for critical issues such as financing for developing countries’ climate efforts.

Progress and problems as UN climate change talks end with a dealhttps://t.co/kZagNj6BsI

or the small presentation by Sir David Attenborough

David Attenborough: collapse of civilisation is on the horizon https://t.co/J75cajawJJ

or – if you wish- in earlier stated words by Paul Ehrlich:

Paul Ehrlich: ‘Collapse of civilisation is a near certainty within decades’https://t.co/KMljt0tuYQ

Funny enough- the new, and Polish Presidency fed-in “Solidarity and Just Transition Silesia Declaration” does read actually quite well, and may make some very good and some practical common sense, so here and there:

To support Energy For One World Program Year 2023